NHS-funded SIRT (selective internal radiation therapy) had been available for patients with intrahepatic cholangiocarcinoma through the CtE (Commissioning through Evaluation) programme until this funding was withdrawn on 31st March 2017 ‘to be evaluated’. 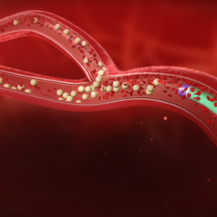 In June 2018, NICE issued their draft Interventional Procedures Guide (IPG) for comment regarding the safety and efficacy of intrahepatic cholangiocarcinoma, in which they did not recommend this treatment because, “Current evidence on the safety of SIRT for unresectable primary intrahepatic cholangiocarcinoma shows that there are well-recognised, serious but rare safety concerns. Evidence on its efficacy is inadequate in quantity and quality.”  And further stating that,  “… this procedure should only be used in the context of research.”

There is more supportive data available than was referred to by the NICE IPG, and AMMF responded very fully to these draft recommendations. To see AMMF’s report and response, click here

However, although the NICE IPG process considers only efficacy and safety and not cost-effectiveness, AMMF was concerned that NHS funding was very unlikely to be restored for a treatment not recommended by NICE, and therefore NHS patient access to this treatment would be denied.

NHS England Radiotherapy Clinical Reference Group have now issued their draft clinical commissioning policy.  AMMF has reviewed this, and also the policy proposition and associated evidence review.  As we expected, following the NICE IPG, they have concluded the following:

‘NHS England has carefully reviewed the evidence to treat chemotherapy refractory or chemotherapy intolerant, unresectable primary intrahepatic cholangiocarcinoma with selective internal radiation therapy and has concluded that there is insufficient evidence to make the treatment available at this time.’ 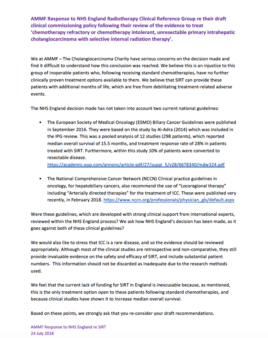 AMMF’s response to NHS England re SIRT for ICC

Responses to this draft were requested to be submitted by 03 August 2018, and AMMF responded fully to NHS England before this deadline.  We expressed our concerns about the decision made, and that the conclusion seems to have been  reached without, amongst other things, taking into account two current national guidelines (ESMO and NCCN) which had been developed with strong clinical support from international experts, with both reporting positively for SIRT.

Although NHS funding for treatment of intrahepatic cholangiocarcinoma by SIRT was withdrawn on 31st March 2017, this may be accessed privately or via a clinical trial.

For information on clinical trials for those with cholangiocarcinoma, including the SIRCCA trial, see : https://ammf.org.uk/clinical-trials/

And for further information on SIRT, see: http://www.mysirtstory.org.uk/how/nhs.htm