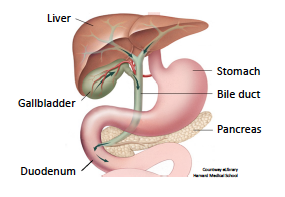 Cholangiocarcinoma (bile duct cancer) causes few symptoms in its early stages. Any symptoms that there are tend to be quite vague, such as nausea and loss of appetite.

There are often few specific symptoms of cholangiocarcinoma until the disease is more advanced. Symptoms can then can include:

which happens when a tumour blocks the flow of bile from the liver to the intestine, causing bile to flow back into the blood and body tissues.  When that happens:

Other possible symptoms include:

The symptoms listed for cholangiocarcinoma can be caused by many things other than cancer, but any of these symptoms should always be checked by a doctor, and liver function tests should be carried out.

As with bile duct cancer, early gall bladder cancer often causes no symptoms.  Most tumours are only discovered at an advanced stage. They can cause a variety of symptoms including sickness, high temperatures, weight loss and pain in the abdomen.

If the cancer blocks the bile duct it may stop the flow of bile from the gall bladder into the small bowel. This causes bile to flow back into the blood and body tissues, leading to jaundice, with yellowing of the skin and the whites of the eyes, the urine also becomes a dark yellow colour and stools (bowel motions) are pale. The skin may become itchy.

The symptoms listed for gall bladder cancer can be caused by many things other than cancer, but any of these symptoms should always be checked by a doctor.

November 2014 – For the first time, a study on the early symptoms of pancreatic and biliary tract cancer (bile duct cancer/cholangiocarcinoma) in patients diagnosed with these diseases has been carried out and the findings have been reported in a paper entitled, “A case-control study comparing the incidence of early symptoms in pancreatic and biliary tract cancer”, and published BMJ Open.

For more details on this, and to read the article in full, click here