When Sally Evans lost her father to cholangiocarcinoma earlier this year, she was determined to work towards raising the awareness of this devastating cancer.

Here AMMF supporter Sally explains in her own words what she has done:

“My dad died of bile duct cancer, in January of this year. Despite him going through lots of tests on a weekly basis, some were painful like having a bone marrow test, his GP and his doctors in the local general hospital couldn’t come up with a diagnosis. He was finally diagnosed in December last year, around Christmas time, and it was too late. He died within in a month.

After his death, I know it sounds cliché, but I wanted to do something to make difference, so no family or friends go through what we did, the heartache and the pain. So, it made me fight for the petition and getting more awareness out there. It is so important.” 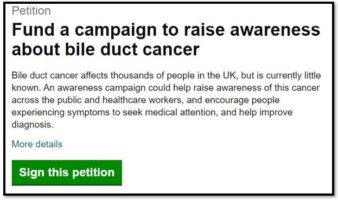