AMMF is delighted to see that the positive research findings of work the charity has been co-funding at the University of Edinburgh have been published in the Proceedings of the National Academy of Sciences. 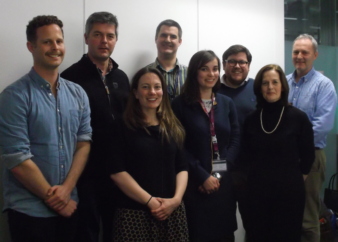 The Edinburgh team have identified a molecule that is a key driver in the development of bile duct cancer (cholangiocarcinoma). They have shown that this molecule – Notch 3 – triggers a pathway of signalling molecules called AKT, which drives cells in the tumour to reproduce uncontrollably.

They also found that tissue samples from patients with bile duct cancer had higher levels of Notch 3 than samples from normal liver, suggesting that blocking the molecule could offer a new way of treating the disease.

Commenting on his team’s work, Professor Stuart Forbes said, “Identifying the signals that drive bile duct cancer growth gives us hope of finding new ways of tackling the disease. We next need to assess how Notch 3 could be targeted with drugs so that we can investigate whether this approach offers the potential for a new therapy.”

The researchers caution that more research is needed before a therapy could be developed, but these findings could help to improve diagnosis. 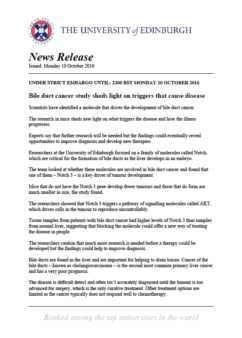 The University of Edinburgh circulated a News Release on 10th October 2016, which included a comment from AMMF’s Helen Morement on the importance of this work.  To read the News Release, click here

To read the paper published in the Proceedings of the National Academy of Sciences in full, click here

To read more about AMMF’s grant towards this research, click here

AMMF congratulates the team on this discovery which is, potentially, very promising.