or Diagnosing cholangiocarcinoma with a urinary dipstick …

The Institute of Global Health Innovation hosted its first Student Challenge Awards on 21 March and, despite facing incredibly tough competition, John Chetwood, a fifth year medical student at Imperial College was declared the winner for his cholangiocarcinoma research project, “Detecting a Silent Killer”.

John was up against four other entrants, combinations of individual students and teams, who each had to present their innovative research work to the panel of judges.  The panel included Sir Liam Donaldson (former Chief Medical Officer and Chair in Health Policy at the IGHI), Jane Dreaper (BBC health correspondent) and Sarah Brown (wife of former Prime Minister Gordon Brown and Adjunct Professor at the IGHI) who questioned each entrant closely. 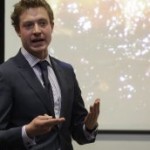 John Chetwood presents his CC research to the IGHI panel

John’s project involved researching the use of urinary biomarkers to create a new diagnostic tool for cholangiocarcinoma.  Blood and urine samples were collected in Thailand, which has the world’s highest incidence of CC, largely liver fluke associated.  These samples were then frozen and transported under controlled conditions to Imperial College London, where they were thawed and analysed.  The analyses showed there was a difference in urinary metabolites between Thai CC patients and matched normal populations that point to a urinary biomarker profile for this condition, and potentially for UK CC (although this is as yet unproven in sporadic UK CC). 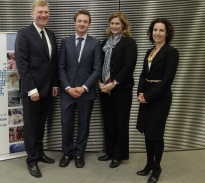 John and the judging panel

On awarding first prize to John, Sir Liam Donaldson, chair of the judges’ panel said: “… the quality and range of the projects were of a very high standard. It was a difficult decision for us to choose a winner as all the projects offered innovative approaches tackling important global health issues. In the end, two projects stood out due to their potential global health impact, with the winning candidate having the edge.”

John commented: “I’m extremely pleased to win the first Institute of Global Health Innovation student challenge competition. It was very exciting to present my project to such high-profile judges, and such an award validates the emerging role global health is playing in international research. Imperial has one of the largest cohorts with chronic liver disease in the country and is an extremely reputable hepatobiliary research centre – and as such I feel extremely privileged to have the opportunity to work in such an institution and with such distinguished experts.

I’m looking forward to working on developing my project further. One option we have is to create a urine dipstick which can detect the presence of the cancer early and accurately – which could have enormous implications worldwide, but especially to people in South East Asia where liver-fluke associated cancer is more common than appendicitis. Such a cheap and easy method has the potential to save many lives.”

Because John’s work has not yet been published, we cannot to link to his presentation – once the data is published we will do so.  However, the money John was awarded (£2,000) will be used to collect more samples from the hill tribes in Khon Kaen Province, Thailand, to continue the pilot data generation, and to validate the potential urinary biomarkers.

The hope is that a urinary test would be available within 5 years, but this needs validation in large cohorts and, therefore, major funding.  In order to take these promising preliminary results further, a multi-million pound grant will be needed.

While we wait for further research to make a urinary test become a diagnostic reality, AMMF sends congratulations to John on his award, and our sincere thanks for this brilliant research.