AMMF has recently agreed a research grant with Professor Roger Williams, Director of The Institute of Hepatology, London.  The grant will be given over three years to help support a new study being undertaken by Dr Salvatore Papa’s team:

“Understanding the molecular basis for the development of intrahepatic cholangiocarcinoma.”

This study was initiated as a joint collaborative effort with the King’s College Hospital transplant team following on some interesting observational findings in patients who had received a liver transplant for hepatocellular carcinoma (HCC).  It seems that intrahepatic cholangiocarcinoma (ICC) can also develop in a patient who has already been diagnosed with HCC.  The findings so far suggest a particular molecular biomarker for ICC development, although its actual role in ICC development is not yet understood.

It was felt that the work in respect to the molecular pathways that has been undertaken so far merits the continuation of the research. 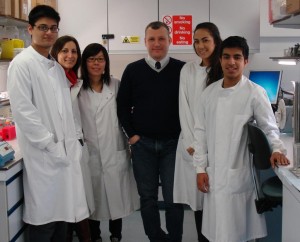 Dr Salvatore Papa is the lead investigator in this study, which is being carried out in the laboratories of the Foundation for Liver Research at the Institute of Hepatology, London (affiliated to Birkbeck College, University of London), and he has summarised this work in lay language as follows:

“Liver cancer is now the third most common cause of cancer deaths worldwide.  The cancer may be a result of spontaneous mutations, viral infections, toxins such as alcohol or drugs, or a wide range of other causes, but the consequence of the ‘injury’ is that normal liver cells become transformed into cancer cells.

Amongst the various types of cell in the liver are specialised epithelial cells called cholangiocytes.  These form the small bile ducts that drain bile from the liver.  In the normal, healthy liver, these cholangiocytes possess a remarkable ability to regenerate, responding to an injury by replacing dead cells with new cells.  However, in a damaged liver this ability to regenerate can go wrong and the consequence can be uncontrolled over-production of altered and malignant cholangiocytes.  Accumulation of these cells in the liver results in the formation of a tumour mass which is called an intrahepatic cholangiocarcinoma (ICC).

Current treatments for ICC include surgery and chemotherapy, but they are often ineffective, particularly if the patient’s tumour has been diagnosed at a relatively late stage, which is often the case.

In this short film, meet the Institute of Hepatology Director, Professor Roger Williams*, and the Institute’s dedicated scientists, including Dr Salvatore Papa. Hear them describe their research work and how they are tackling problems of liver disease such as alcohol, liver cancer, viral hepatitis and fatty liver disease.

(If you have a problem viewing the film, you can access it by, clicking here )

AMMF is delighted to be helping to support the research work towards understanding the development of ICC – a promising step along the way of the long journey to find the answers to cholangiocarcinoma.  We send our best wishes to Dr Papa and his team for the success of this work, and we look forward to hearing the results in due course. 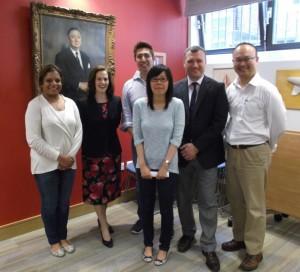 To read a report on AMMF’s visit to the Institute of Hepatology on 19 June, 2013, to see the facilities and to hear how the work is progressing, click here