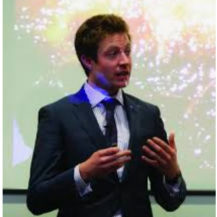 BSc in Gastroenterology and Hepatology

I’m delighted and honoured to be able to contribute to the Viewpoint series! I am a final year medical student at Imperial College School of Medicine, with a specialist interest in cholangiocarcinoma. Recently some research we undertook won both a prize at a national research conference, and a special Innovation in Global Health competition panelled by Sir Liam Donaldson, Sarah Brown, and the BBC’s Jane Dreaper – and I’m here to report to you the exciting results we are finding in this area.

To read about the Innovation in Global Health competition, click here.

What was the research?

Simply, we were looking for an easier and better way to detect this cancer. As Dr Khan explained in his viewpoint article, cholangiocarcinoma (CC) often is only detected very late, and even when doctors suspect it may be there there is no single simple test that conclusively proves a diagnosis of CC as many other things can cause similar symptoms. However if we could detect it earlier, or even say with confidence if someone has this cancer, then this would have much better outcomes for sufferers.

How would you detect it?

We were looking for any changes this cancer was causing in the urine of patients, so that, hopefully we can develop a test using urine alone.

‘Dipstick’ urine tests use chemicals that change colour in the presence of certain things you are testing for. Currently they are used for detecting pregnancies, looking for sugar and blood in the urine etc – and they are good not only because they are accurate but because they are cheap, easy, non-invasive, and safe, and transportable if you are testing someone in a less developed country (where this cancer is most common).

If we had such a test for cholangiocarcinoma it would be easy to look for it if you had the slightest suspicion of this cancer, plus you could test people during treatment to see if the cancer was responding

How did you look for it?

Collaborating with Khon Kaen University, Thailand, I went to North-East Thailand – an area with the highest rate of cholangiocarcinoma in the world due to liver parasite infestation. There I took samples from healthy volunteers and cancer patients, and after processing and transporting them to Imperial I used complicated techniques to look at everything present in the urine and how much of it there was.

NB All volunteers consented for the research and were aware that photographs were taken. To date we have samples from 70 volunteers and are aiming to collect a much larger database later this year.

What did you find?

Excitingly we found we could pick out who had the cancer based on what was in the urine alone.

What does this mean?

This supports the exciting idea that we may be able to develop a test looking at the urine alone. However this was the first ever study to look at this cancer in this way, and given how new this is we were limited in how many patients we were able to take samples from. Imperial’s hepatology unit is now looking further into this area and what exactly this means, and I am hopefully going back out to Thailand in 2013 using the money we won in the Global Health competition.

It is still early days but I am extremely excited that this research is steadily progressing towards that dream-goal of a urinary dipstick test – and we are excitedly waiting to see what results we get from the next stage in this research.

“We were very pleased with John’s preliminary work which has formed the platform of ongoing larger studies with the Liver Fluke and Cholangiocarcinoma Centre in Khon Kaen in Thailand.

Chloangiocarcinoma is 300 times more common there than in the UK. One of our team, Dr Simon Ralphs, is building on John’s sterling work and is going out to Thailand this November to collect more samples from the healthy Thai population, from those infected with liver flukes and from those with cholangiocarcinoma to see whether we can confirm these initial findings in a larger patient population.”