The course took the girls 42 km round Paris, but there was little time for sightseeing – in fact the only sight Tiff and Laura wanted to see was the finish line!  They both had birthdays that weekend and celebrated in style by completing the course in 4 hrs 45 mins.

Tiff commented, “It was a fantastic day – we had 24 supporters with us so familiar faces were popping up along pretty much the whole route!”

A great result for them, and for AMMF.  Congratulations and huge thanks to them both. 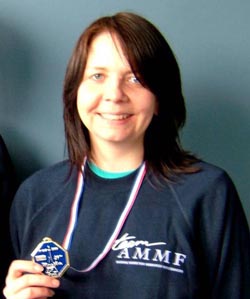 Tiff with her well deserved medal