Silverstone Half Marathon
Conditions were ideal for the 13 mile race in March this year. Sean Cooksley, on his first outing for AMMF, came home in 1:51:11 with stalwart AMMF supporter Trevor Sibley finishing in 1:56:59. Congratulations and many thanks to both of them.

10k Manchester
Jenny and Hilary Rigg with their friend Beth ran the Manchester 10K for AMMF in memory of Alan Rigg (their father and husband) who died from cholangiocarcinoma in 2009. Well done girls, and a big thank you from AMMF! 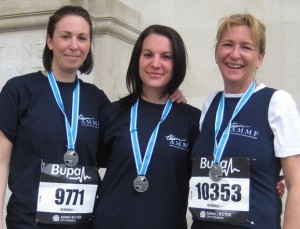 5K Chelmsford
The Team AMMF girls Michaela, Carol, Amy, Julie and Helen on 20th June at Hylands House, Chelmsford where, along with 6,000 others, they completed their 5K in glorious sunshine. 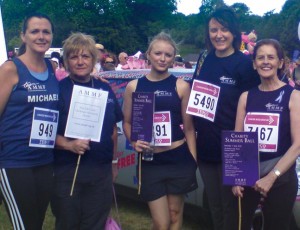 5K Chesterfield
AMMF supporter Diane Peternell ran the 5K in Chesterfield in memory of her mother who died from cholangiocarcinoma. She wore her AMMF t-shirt with her mum’s photo printed on, which attracted the attention of the local radio station! Well done, Diane, and thanks for helping to raise awareness. 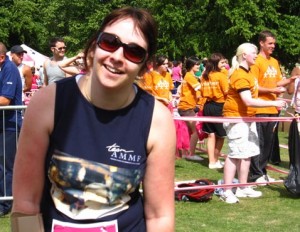