The biliary system includes the network, or tree-like structure, of ducts within the liver and the common bile duct outside the liver.

*Bile is made in the liver and stored in the gallbladder. It helps to break down fats found in foods, and to rid the body of waste material filtered out of the bloodstream by the liver. 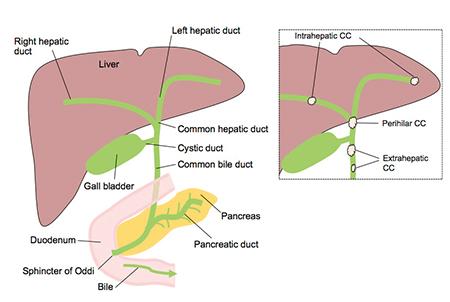 Cholangiocarcinoma may affect any part of the bile ducts

Depending on where the cancer begins, cholangiocarcinoma is categorized as follows:

Extrahepatic – affecting the bile duct outside the liver.

Hilar (Perihilar or Klatskin tumours) – affecting the junction of the left and right hepatic ducts.

Distal – affecting the bottom portion of the bile duct, near to the connection with the small intestine and pancreas

Adenocarcinoma, cancer arising from the mucus glands lining the inside of the bile ducts, is the most common type of cholangiocarcinoma, accounting for up to 95% of all cases.