Sophie Connick – a mum, wife, daughter, sister and aunt who brought joy into our lives.

You never expect to lose a younger sibling. It is just not the natural order of life. It is 4 years since our youngest sister, Sophie died from bile duct cancer when she was 43 – only 6 months after her first symptoms appeared.

Our families’ world fell apart but hers fell and shattered around her as she tried to cope with the physical symptoms whilst helping her two daughters then aged 8 and 12.

It started with back pain and several trips to the doctor before they would take her seriously, sending Sophie home with pain killers and sleeping pills. It was only when the jaundice appeared, that she became an emergency admission into hospital followed by MRI’s and a stent being put into place.

Sophie was a free spirit in her short life, moving from Africa to the UK and then to her final home in New Zealand. Sophie lived for her family and her final dream had been one last holiday to Fiji. Although she was weak, her abdomen distended and in a lot of pain, she fought through to share this one last memory with her husband and daughters in May 2012. Sophie wanted to just walk on the beach and feel the fresh air on her skin; she wanted to just sit and watch the sunset.

Sophie was always very intuitive, she wanted to be remembered for making people laugh and was always telling a joke or saying something funny and in this month of CC awareness, Sophie reminds us to find the joy in the small things around us. CC puts life into perspective. Re-evaluate what it is that is important in your life. 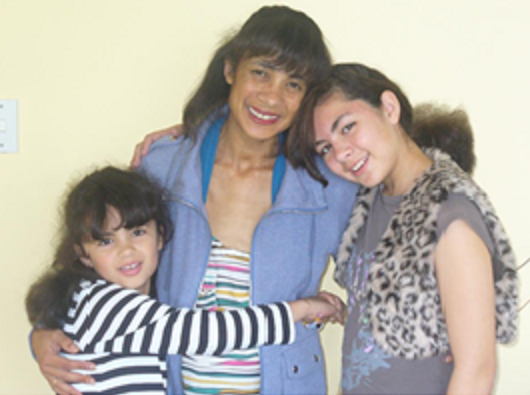 Photo of Sophie and her girls; April 2012