In January 2014 my sister Veronica Sherrard. was diagnosed with cholangiocarcinoma, just weeks after getting engaged to Declan and planning a new chapter in her life. Our world was turned upside down.

Aged just 30, Veronica had been extremely tired for months but she put this down to her active lifestyle. Then an uncontrollable itch developed and blood tests and investigations resulted in devastating news.  A huge tumour was found in her bile duct which had spread to her liver – Stage 4.

Within 2 weeks she had an emergency, major liver resection and the tumour was removed. Chemo followed, and life was very difficult, but Veronica’s strong faith in God helped her through.

In January 2015, Veronica wanted to get back to her loved job as speech therapist at Thornfield Special School, walking her dog Ruby and planning her wedding day. But, surgery complications sadly meant she spent most of 2015 in hospital.

Although all this took its toll, on 25 July Veronica married Declan, who was so supportive and loving throughout her illness.  She was radiant and so happy that day, but, with more complications, in September came our worst fear, the cancer had returned and surgery was no longer a hope. Veronica was physically and mentally drained, but her faith kept her going and she started chemo again.

Tragically, Veronica lost her battle on Sunday 10th January 2016. No more suffering for her, but her family are left heartbroken.  We had never heard of cholangiocarcinoma, but it has caused such devastation. Veronica was bubbly, kind and such a good auntie to her nieces Shannon, Caitlin and Caoimhe. We all miss her so much.

To date, our family, friends and Veronica’s colleagues have raised £11,792 for AMMF for research into this ‘rare’ cancer, which is increasing in younger people. 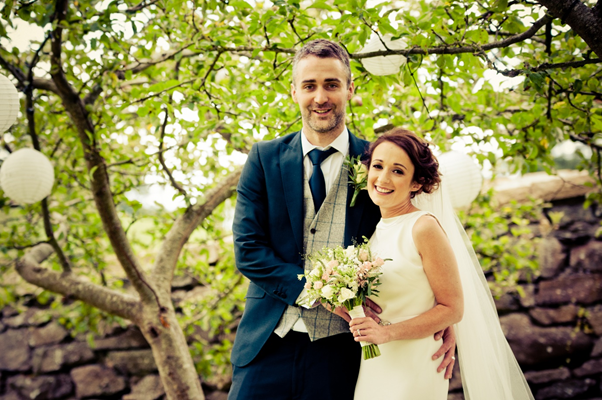 Veronica and Declan on their Wedding Day.