AMMF’s Cholangiocarcinoma Awareness Month is now firmly established as an annual event, and is instrumental in the ongoing task of raising awareness throughout the UK. Each year we work to raise awareness via the social media, and with a specific campaign, and our supporters hold their own events to raise funding and awareness.

This year, 2014, the awareness campaign focused on GPs 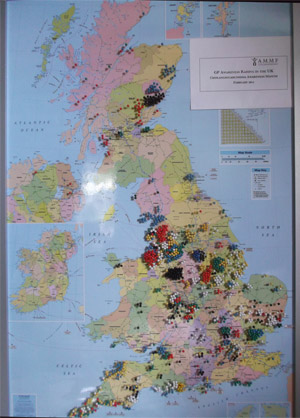 GP practices – each pin represents a location circulated as at 16.07.14

With the incidence of cholangiocarcinoma (CC) markedly increasing and many younger people now being affected, it is vital that GPs are made aware of the existence of CC, its symptoms and that, most importantly, time is of the essence in achieving a diagnosis so that the patient has the best possible chance of life saving surgery.

AMMF produced a letter – straightforward in its approach – asking GPs to be aware of the insidious and often non-specific symptoms of CC, and drawing attention to the fact that slightly abnormal liver function tests can be the earliest sign, so urgent assessment is needed if the window of opportunity for surgery is not to be lost, with dire consequences…

AMMF’s supporters were key in distributing the awareness letters. An amazing number of GP practices across the UK were circulated, and some very positive responses were received.

The GP awareness campaign is continuing – if you would like to find out more, please click here

Once again this year we had a fantastic response to our Facebook Daily Guest Post feature . And what incredible posts they were – telling of love, courage and support, of so many people lost to this ruthless disease, and of the appalling lack of knowledge there is of CC.

The Guest Post feature attracted an enormous amount of attention, and many supportive comments. According to the Facebook analytics this year many of these individual posts were seen on more than 8,000 newsfeeds across the Facebook community, so this feature is very effective on two levels:

Thank you to everyone who took part in writing and sharing these posts – we know it takes enormous courage – and thanks also to all those who put up such wonderful, supportive comments on them, too.

This year, for the first time during Cholangiocarcinoma Awareness Month, we had a Specialists’ & Researchers’ Comments feature, too – we invited various individuals to write a short endorsement for AMMF and give some thoughts on CC in their particular areas.  These proved an excellent way to give an overview of the reach of AMMF and also the areas of research the charity is involved with. 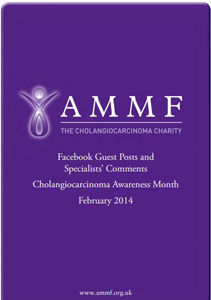 Although all the posts – Guest Posts and Specialists’ and Researchers’ Comments – will remain on Facebook for posterity, they are now available here, in one place as a downloadable pdf.   There is a contents page – each name live linked to the post – and all photographs and live links to external pages have been included.  (Comments to the individual posts are not included in the pdf – but remain on Facebook, of course.)

Thank you to everyone who took part in any way during Cholangiocarcinoma Awareness Month 2014 – with your help more people than ever will know about this disease, and it is wonderful to think that, through this awareness, lives will be saved.