A step towards more effective treatments …

The mechanism, known as the ‘Wnt’ pathway, is already known to cancer experts. It consists of a network of proteins that carry signals inside cells and experimental drugs that block it are already being tested in patients with other cancers.

“This promising study shows that, in animals, bile duct cancer may be especially vulnerable to drugs that block a particular set of signalling molecules.”

Professor Stuart Forbes, of the MRC Centre for Regenerative Medicine at the University of
Edinburgh, said: “We are excited by these results because these drugs are already being tested in clinical trials for other types of cancer and could be beneficial for patients with
cholangiocarcinoma.” 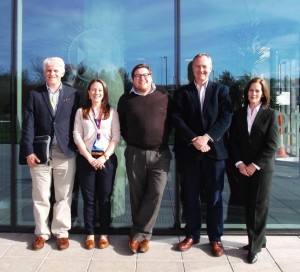 Dr Luke Boulter, of the MRC Human Genetics Unit at the University of Edinburgh, who led the research, said,

“Identifying the signals that control bile duct cancer’s growth will allow us to design better treatments that are urgently needed.”

This study in Edinburgh gives the first indication that bile duct cancer may be particularly susceptible to these drugs.  Plans are now in the pipeline to find out whether the drugs will be effective in patients. 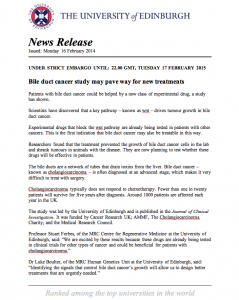 University of Edinburgh News Release re the Wnt pathway research

The University of Edinburgh circulated a News Release just prior to the paper’s publication, which included a comment from AMMF’s Helen Morement on the importance of this novel work.  To read the News Release, click here

Cholangiocarcinoma is an under-researched, much neglected but truly devastating disease, so it is good to see progress being made in novel areas.  We are hopeful that this research work with Wnt will provide a real step forward towards a clinical trial and some long awaited possible improvements in treatment.

AMMF congratulates the team on this discovery which is, potentially, very exciting.

To read the paper published in the Journal of Clinical Investigation in full, click here

To read more about AMMF’s grant towards this research, click here

To hear Professor Stuart Forbes explain this research, click below:

Cholangiocarcinoma – bile duct cancer – is a rare but aggressive type of cancer that affects the network of tubes that carries bile from the liver to the digestive system. It is often diagnosed at an advanced stage, meaning it is very difficult to treat with surgery.