The findings of the multicentre PHOTOSTENT-02 trial¹ (which ended in 2012) have now been published.

This study investigated the possible benefits of the use of stenting plus photodynamic therapy (PDT)² against stenting alone in those with obstructive jaundice caused by cholangiocarcinoma (bile duct cancer or biliary tract cancer (BTC)).

It seems that those patients who received PDT in addition to stenting had a poorer outcome than those receiving stenting alone.  Therefore, the conclusion reached is that:

” … patients with BTC who received PDT in addition to optimal stenting had a poorer OS (overall survival) than those with stenting alone, which was only partly explained by fewer patients in the PDT arm receiving palliative chemotherapy. Based on these results, we conclude that optimal stenting remains the treatment of choice for malignant biliary obstruction, and that the use of porfimer sodium PDT for this indication outside of clinical trials cannot be recommended.” 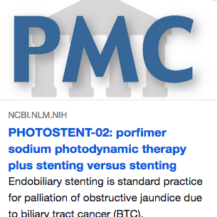 The report on the PHOTOSTENT-02 trial is published

¹For information on this trial, see: https://clinicaltrials.gov/ct2/show/NCT00513539

²Photodynamic Therapy (PDT) uses a combination of laser light of a specific wavelength and a light-sensitive drug to destroy cancer cells. However, following the findings of the Photostent-02 trial, this therapy is no longer recommended for cholangiocarcinoma patients.